Z45 Katana is a melee weapon appearing in Shadow Warrior 2.

One of the earliest acquirable swords, it is a drop from Zilla troops and will be likely found in the second story mission My Hero.

There is nothing highly specific about this sword. It might be useful in a melee against many small enemies due to bonus effect, but otherwise is functionally identical to Lil' Wang. 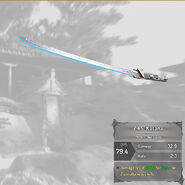 Z45 Katana stats
Add a photo to this gallery
Retrieved from "https://shadowwarrior.fandom.com/wiki/Z45_Katana?oldid=10107"
Community content is available under CC-BY-SA unless otherwise noted.