For the character from the original game, see Zilla (Classic).

"I am humanity's last, best hope. I am all that stands between us and oblivion. My methods might appear reckless, but I assure you, under the circumstances, they are vital."
—Zilla to Lo Wang in Shadow Warrior 2.

Orochi Zilla is a powerful Japanese industry magnate that suffers from paraplegia. One day, he's contacted by Enra, the ruler of Shadow Realm. Enra gives a proposition, to find and assemble an ancient sword called Nobitsura Kage. In return, Enra would cure Zilla's paraplegia and the assistance of demons to conquer the Earth. Zilla accepts and sets out to find the parts to the sword. At some point, Zilla finds one of the Whisperers with a sword part, and keeps it as hostage.

Zilla finds out that an antique collector, named Mizayaki, has one of the Nobitsura Kage's parts in his possession. He sends Lo Wang, his most trusted assassin to purchase the sword for 2 million dollars. Mizayaki refuses and captures Wang. Zilla contacts Mizayaki, trying to persuade him to give away the sword but he fails. Before Zilla can finish his conversation, his transmission is abruptly cut off and demons attack the compound.

Later in the game, Enra contacts Zilla warning him that Lo Wang has betrayed him and is coming for the last part of the sword. Enra then heal Zilla's paraplegia, in the process giving him demonic abilities. Zilla then fights with Lo Wang, but Wang gets the upper hand and Zilla must escape. After Wang returns from the Shadow Realm with Hoji by his side, he confronts Zilla, and after a another battle with him, cuts off Zilla's sword arm. As Wang reassembles the Nobitsura Kage to its full Ancient-killing power, Zilla escapes with the help of the Kyokagami Twins.

During the Collision, gangs of demons started attacking and slaughtering humans they come across. Seeing an opportunity to paint himself as a savior of humanity, Zilla sends waves after waves of private troops against the demon hordes. He also joins forces with Yakuza, so together they would have better chances against the demons.

The war is finally stopped by Ameonna, who pacifies the demons and stops them from inflicting more to humans. With the battle over, Zilla turns his attention to rebuilding the Zilla City, reforming it into a futuristic metropolis. For his help during the Demon invasion, Zilla is elected as the new mayor of Zilla City. He quickly begins to rule the city with a firm hand and push out Yakuza. Zilla demolishes an entire district controlled by Yakuza, which only further angers the criminal organization and completely ends their previous alliance.

Three years after the Collision, Zilla started to experiment with crude, a black substance that starts to appear all over the wilderness around Japan.  Although at first, the experiments do not produce any results, during night, Zilla notices, that the crude reacts to his Chi as the result of the Black Tears, he was given by Enra. He quickly discovers, that the substance reacts to Chi, producing huge amounts of chemical energy. This gives him an idea to create a Chi engine, which could harness this power.

The first few tests with a car, fitted with a Chi engine ends in multiple casualties of his assistants. Zilla then decided, that Chi engines could power their cities and started experimenting with this idea. In February 16, Kamiko applied for a job in Zilla Enterprises and Zilla immediately noticed her vast knowledge on Chi. In just one day, Kamiko manages to make more progress on Chi engines, than Zilla in six months of testing. Zilla was quite amazed to see, how easily Kamiko could manipulate raw crude. By October, Zilla began to mass produce micro Chi engines built inside various electronic devices in Zilla City. Kamiko also creates the Compound 61, a drug produced from a mixture of crude, human blood and few other chemicals, that induces heightened mental state in humans, giving them visions of new technologies, they could built.

After Zilla himself uses the drug, he expands the application of Chi engines to built Zilla News Network. He also recruits Xing to work as his anchor. Seeing TV again, causes the citizens to be more docile. By the end of the year, Zilla is pleased to see best sales year on record. By fifth year after the Collision, Zilla started to have worries, regarding Kamiko's pace with breakthroughs, fearing that she might eclipse his abilities. Eventually, his men discover, that Kamiko has ties to Yakuza. Believing her to be conspiring behind his back, Zilla decides to kill her.

The next day, Zilla orders the Kyokagami Twins to capture Kamiko and bring her to the labs. There Kyokagami Twins inject Kamiko with an overdose of Compound 61 as Zilla thanks her service. Much to his shock, Kamiko begins to exhibit abnormal behaviour. This intrigues Zilla and he orders the Twins to keep Kamiko safe as he goes to check her personally. But Lo Wang manages to infiltrate the labs and rescue Kamiko. Eventually, Zilla tracks down Kamiko's body location to Dragon Mountain and sends his forces to retrieve her. Although they manage to reach the body, it mutates and goes on a rampage. After a battle with Lo Wang, the body escapes to the top of Devil Mountain, where its captured by ZillaCorps.

When the body is returned to Zilla Enterprises, Zilla is disappointed to discover, that Kamiko has mutated beyond recognition. Soon after Lo Wang arrives and confronts Zilla himself. Lo Wang warns him to stand aside as the last time they fought, Zilla lost his hand. Meanwhile Zilla is intrigued as to why Lo Wang wants the body. Wang avoids to answer and Zilla reassures him, that he should turn back as Kamiko is lost. Zilla than adds, that once the Outer Gates fall, his soldiers of Project Hope will be the only ones to stand against the apocalypse. He then reveals, his plan to put a Chi chipset in Lo Wang's brain and make him one of his soldiers. Wang refuses, telling him, that he will die first before that happens.

With no way to reason with Lo Wang, Zilla decides to kill him and enters a mech. After a tough fight, Wang proves victorious. After defeating him, Ameonna appears. She reveals herself to have used both Lo Wang and Zilla to fight each other, hoping they would both end up dead. She plans to destroy the Outer Gates and destroy the entire world. To accomplish this, Ameonna's sleeper agents in Project Hope, steal Kamiko's body and take it to the gates. Given the circumstances, both men put aside their differences for the time being, with Zilla loaning Wang the Arm of Orochi to put and end to Ameonna's madness.

When Lo Wang reaches the gates, Zilla warns him to not do anything rash, as the existence of their entire species hang in the balance. At gates, Zilla arrives together with Xing and Mezu, only to find Ameonna already killed by Lo Wang. Kamiko decides to seal the Outer Gates open using her living soul and rectify the two worlds. She then flies to the gates, shattering them. Out of the gates, a giant dragon emerges and then swallows Lo Wang.

While the game is not released, the official website states the following:

Fallen corporate shogun Lo Wang and his former employer turned nemesis turned sidekick Orochi Zilla embark on an improbable mission to recapture an ancient dragon they unwillingly unleashed from its eternal prison. Armed with a punishing mix of blades and bullets, Lo Wang must traverse uncharted parts of the world to track down the dark beast and push the apocalypse back yet again. All it will take is the mask of a dead god, a dragon's egg, a touch of magic, and enough firepower to hold off the impending cataclysm.

In the reboot, Zilla's personality stays quite the same. He's an ego maniac, and seems to have psychopathic tendencies. He has a God complex, believing his authority is higher than anyone's else. Once his paraplegia is cured, he declares that he's going to take the Nobitsura Kage from Wang and then use it against Enra to enslave him. However, he never doubts Lo Wang's loyalty to him, even disbelieving Enra's claims about Wang's betrayal.

Orochi Zilla stays the same as in Shadow Warrior (2013) - a man of interest, which cares mostly of his own, and thanks to that his behaviour is predictable. He used Kamiko to boost up technology development, then "after laying golden egg he was looking for" he - as said during discussion with Lo Wang "progress demands sacrifice" - decides to experiment on her and poison with high dose of Shade. Zilla also tittles himself as saviour of humanity (thanks to "Project Hope", which in his opinion will save humanity when Outer Gates falls).

Orochi Zilla’s overweening pride and ambition cost him everything. He lost his billions and his position as the world’s most unlikeable CEO and became a morally bankrupt, broke ass old fart hellbent on revenge. He focused his wrath on the ancient dragon that turned his empire to dust. But Zilla wants more than payback. He wants all his stuff back. To make that happen he teams up with his arch enemy, Lo Wang. Zilla takes charge as the man with the plan and Lo Wang takes orders as the man with the katana and an impossible array of crazy-ass weapons.

In the reboot, Zilla uses demonic powers to aid him in the battle with Lo Wang. He can use teleportation, ground wave based attack and he can move really fast. If he loses enough health, Zilla can heal himself back to full health. This leaves him vulnerable to attacks from Lo Wang. Only the sword and Ki abilities can be used against him. If Lo Wang pulls up a gun, Zilla will disappear and will only re-appear once Lo Wang puts away his guns, saying that he wants to have an honorable fight with swords only. Shurikens seem to have no effect on him.

Here ZIlla appears as a boss in a similar way as in Shadow Warrior Classic - in a giant mech, rarely supported by 2 drones, which makes him invincible, so destroying these oponents are vital to end fight quickly. Due to large size player should avoid using sword, as mechanoid melee attack can deal significant damage, however he is the easiest boss to be hit with rocket launcher or rifles. His attacks can easily be avoided. On higher difficulties he is resistant or/and immune to elements excluding physical damage.

In Shadow Warrior (2013) Zilla wears a full red suit with Zilla Enterprises logo on the back. He is also bound to a wheelchair until Enra gives him power, at which point he ditches it.

Zilla appears as much older person and has replaced his cut off arm with a cybernetic one. He also changed his red suit into a black one. 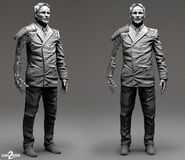