"Chi-tech assault rifle come in handy when you want stopping power with a high rate of fire."
—In-game description.

Clip reload time decreased by 25% for 5.0s on kill

Zweihänder is a machine gun appearing in Shadow Warrior 2.

For a practically end-game drop, it`s rather underwhelming. For all it`s looks, it is more of a heavy assault rifle than machine gun. Having the least penalty to movement speed out of all machine guns helps with that.

Zweihänder can serve as a decent damage hose with judiciously picked clip expansion mods, but it is hampered by strange inability to equip piercing ammo mods. 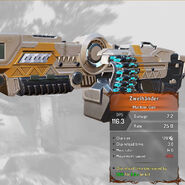 Zweihänder stats
Add a photo to this gallery
Retrieved from "https://shadowwarrior.fandom.com/wiki/Zweihänder?oldid=13482"
Community content is available under CC-BY-SA unless otherwise noted.